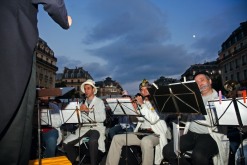 The Hotel EDEN Paris is one of the finest hotels in a city bursting with activities, events and festivals. During your stay at the Hotel EDEN in June you can celebrate two major events presented by the city of Paris: Les Grandes Eaux de Versailles; a fabulous light and music show and the Fête de la Musique ; the original World Music Day event.

Celebrate the Fête de la Musique during your stay at the Hotel EDEN Paris.

Being located just steps from the Metro, allowing access to almost all locations in the city of Paris, we invite you to celebrate at the Hotel EDEN the 'together in music' inclusivity theme of the 34th edition of the Fête de la Musique. In our garden or in the many splendid locations throughout Paris in which numerous musicians will be performing every style of music you can imagine, you can join in the celebration of this art form which unites disparate people all over the world. It takes place on June 21st, 2015.

The dancing fountains of Versailles

Every Saturday from June to September 2015, in the exquisite gardens of the Palace of Versailles, a celebration of music and light takes place. Inaugurated by King Louis XIV in the year 1666, this tradition is an enchanting one. There are live orchestral performances of French baroque music accompanied by the lovely sight of an illuminated wonderland of dancing fountains. If you want to be one of the many delighted people who attend this amazing show every year, treat yourself to some choice accommodation by staying at the Hotel EDEN Paris, located close to the Parc des Expositions de la Porte de Versailles.