A gentle tour of the bridges of Paris 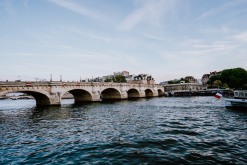 There’s nothing more pleasant on a sunny afternoon than to walk along the Seine, admiring the wonderful old buildings along the river’s banks. Equally impressive among these architectural marvels are the bridges of Paris. Take the opportunity to stroll across these beautiful, cleverly designed and skilfully engineered structures during your stay at the Hotel Eden.

Our establishment is ideally located in the 15th arrondissement, in an area renowned for its many shops, pretty squares and typical brasseries. When you spend a few nights at the Hotel Eden, you can easily discover the capital’s many delights and, particularly, take advantage of the leisure opportunities offered by the banks of the Seine. Over the centuries, some of the most famous buildings in the history of France have flourished along this great river, from the Louvre Museum to Notre Dame Cathedral, the Grand Palais and the Conciergerie. The Seine is crossed by nearly forty bridges, allowing you to wander from the Left Bank to the Right Bank as the fancy takes you, and many of them are well worth seeing up close.

Bridges famous throughout the world

Don’t be fooled by its misleading name, as the Pont Neuf (New Bridge) is in fact the oldest in the capital. Inaugurated in 1607, during the reign of Henri IV, it is easily recognisable by its mascaron (stone faces) ornamentation.
The nearby Pont des Arts attracts lovers from all over the world, who come to admire a sublime view of the Ile de la Cité from one side and the Eiffel Tower from the other.
Then there’s the Pont Alexandre III. Built for the Universal Exhibition of 1900, its rich array of bronze sculptures and gilded copper scintillates in the sunshine.

Hotel Eden, a 4-star hotel at the heart of Paris 15th