Chagall between war and peace and Luxembourg Garden 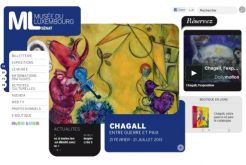 dans la catégorie What to do in Paris

Chagall between war and peace is an exhibition, showing at the Luxembourg Museum until the 21st July. The art selected gives the spectator a view into major events influencing Chagall's work. The Luxembourg Museum, with stunning surrounding gardens, makes the perfect venue for Chagall's work. Reservations at the Hotel Eden Paris are ideal for exhibition attendees, as it's in close proximity, via the metro.

Chagall, described as being an early modernist, was born in 1887 in Russia's Vitebsk. This innovative Jewish artist lived for almost a century. During his lifetime he experienced many startling events, including 2 world wars. The world wars and persecution of Jewish people heavily influenced the narratives in his works, as did his Jewish roots and childhood experiences. Chagall's artistic style was partly inspired by Cubism, Surrealism and Suprematism, although the love of his wife Bella and hometown childhood experiences, remained common themes in his art, rendering his approach quite unique.

The Museum of Luxembourg is the perfect venue for Chagall's exhibition. Built between 1615 and 1630, this site was the first museum to open its doors to the general public, in 1750. The museum has featured works from the greats, such as Leonardo da Vinci and Rembrandt and is recognised as being prestigious. The Luxembourg gardens are idyllic, and walking through the park sets the scene for a day of appreciation all things beautiful.

A trip from Hotel Eden Paris to the Chagall between war and peace exhibition, takes around 30 minutes by metro, making our hotel ideal. Hotel Eden Paris is in close proximity to the vibrant pulsating city and the metro station Vaugirard station. We maintain a sense of serenity, with our nature inspired rooms, making your stay relaxing and tranquil.