Paris at the pinnacle of the art world 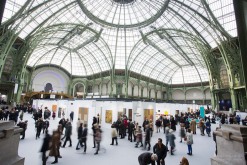 From March 31st to April 3rd, 2016, the French capital welcomes the return to the Grand Palais of the modern and contemporary art exhibition, the Art Paris Art Fair, as well as the latest edition of the PAD Paris at the Tuileries from March 29th to April 3rd.  Two internationally renowned events honouring the world of art.

Paris, the capital of art

As befits its status as a cosmopolitan city par excellence, this year Paris hosts 143 exhibitors from 20 countries at the Grand Palais, including first time guests Azerbaijan, Colombia and Iran. In addition to the presence of many international galleries, the exhibition provides a major platform for French artists. With over 55,000 visitors and 1,200 accredited journalists in 2015, the Art Paris Art Fair has emerged as the key event of the modern and contemporary art scene. The exhibition fills 6,500 m2 beneath the magnificent glass roof of the Grand Palais.

At the same time and not far away, the Tuileries provides the delightful setting for the art and design event PAD Paris, which this year celebrates its twentieth year of existence. It’s a vibrant showcase for established artists, rising talents and young designers in vogue.

Art in all its forms

Reflecting the diversity of art forms, Paris organises two different events. The Art Paris Art Fair is devoted mainly to modern and contemporary art from the post-war period to today. It offers an opportunity to discover many designers who have played an important role in the artistic evolution of the modern world, as well as the young creators who will influence the world of tomorrow.

PAD Paris, on the other hand, focusses mainly on modern art, furniture, contemporary design and even jewellery. It’s a veritable paradise for art lovers and collectors.