Paris is a delight for the eyes and the palate, and this autumn will show you why. 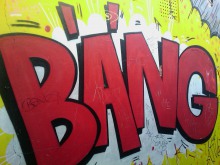 On September 22nd, the Musée Maillol pops the lid off the new season with an exhibition of major works from the American Pop Art movement. You can catch this one until January 21st, 2018.
Then, on October 28th, the Porte de Versailles Exhibition Centre hosts a particularly tempting trade fair when the Salon du Chocolat, the world's largest event dedicated to cocoa, returns to the capital. This one runs until November 1st. It’s all easily accessible from the Hotel Eden, your urban paradise...

The Musée Maillol hosts a selection of works drawn from the collection of the Whitney Museum in New York. Pop Art: Icons That Matter explores this often controversial art movement by way of a focus on its early 60s to late 70s peak of creativity.
With humour, irony and the power often inherent in images, this art depicts ‘the American way of life’ in a critical or celebratory way and often both at the same time. Colourful and vibrant, it uses everyday objects and iconography borrowed from or inspired by popular culture artefacts such as comic books and advertising.

With more than 500 participants from 5 continents, the Salon du Chocolat is the essential trade fair for magic bean fans of all ages.
Live demonstrations, workshops, conferences, tastings, shows and fashion parades featuring chocolate couture ... it's a major celebration of cocoa and chocolate!
Among the themes this year: cocoa adventurers, healthy food and vegan trends, wine and chocolate master classes, culinary photography and more.
From 10:00 to 19:00 every day. Inaugural evening on Friday, October 27th from 19:00 featuring a new show.

Feel free to ask us how to get there on foot or via the Metro.