A summer in Paris: gourmet ice cream, events and festivities. 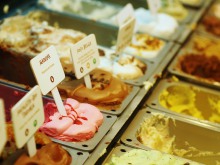 When the weather turns hot, it's an ice-cream you need... But how do you find the best? The Eden Hotel offers some suggestions of where to discover the finest ice cream parlours in the capital. We also invite you, in this beautiful month of June, to take a trip to the Paris Air Show and relax at the Fête de la Musique, where you’ll be able to make the most of the shortest evening of the year.

Here comes the summer; the season of ice cream! But why wait any longer to enjoy these sweet delights that melt on the tongue and flood your palate with gorgeous flavours, including some distinctly original creations straight from the imagination of particularly talented ice cream makers. The Eden Hotel suggests you try Raimo in the Marais, which has been hugely popular for some 65 years, or Berthillon in the 4th arrondissement, established in 1954, where you can savour the fine flavours of ice creams made entirely from natural ingredients and served in elegant surroundings, or to take away. We also advise a visit to IceRoll (20th) for a new concept; ice cream rolls made on a plate cooled to -30 ° C as you watch, or Spaghettina (10th), a specialist in German spaghetti ice cream!

Get on board for the Paris Air Show!

Aviation enthusiasts or anyone who enjoys a great show should not miss the 52nd edition of the Paris Air Show, which will be held from June 19th to 25th, 2017 at Paris-Le Bourget Airport. The world’s oldest event of its kind, dating back more than a century, the Paris Air Show brings together all the leading players in the global aeronautics industry. The first four days are reserved for professionals, but the weekend opens up the event to the general public. Come and see 150 aircraft, a number of which are involved in the often spectacular flying displays held each afternoon.

Experience the universal language of the Fête de la Musique

The Fête de la Musique, also known as World Music Day, began in Paris in 1982. This annual celebration of music has since spread across the world, but the original event is still the best! So come along on the solstice, June 21st, and enjoy the free live music performances that will take place during the day and evening in various venues, on the streets and in public spaces throughout the city. All kinds of musical styles and genres will be represented, including rock, folk, jazz, hip-hop, blues, choral, classical, electro, indie and world music. This is truly a festival for all tastes, celebrating the rich and wonderful diversity of music, the universal language!