An unusual walking tour in the capital 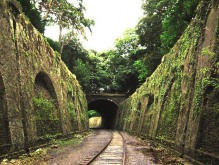 If you want to think outside the box and discover Paris in a different light, we have a great suggestion for you. Walk the mysterious paths of the Petite Ceinture, a place full of surprises. Just follow our handy guide.

For an unusual trip to Paris, discover the Petite Ceinture

The Petite Ceinture (Little Belt) is a disused double track railway forming a 32 km ring of cuttings, tunnels and bridges running through the heart of Paris.

The system was built to connect the major Parisian railway stations in the mid-19th century, before being abandoned during the 1930s in favour of the Metro. Parts of the system were used for freight transport until relatively recently.

Several sections are now landscaped walking areas. Not far from the Eden, in the 15th arrondissement, at the Place Balard and the Rue Olivier-de-Serres, a new and very unusual stroll awaits you.

A place reclaimed by nature

The railway stations and platforms that once formed the Petite Ceinture are now barely visible in places. Mother Nature has reclaimed this old railway system and there is a tangle of greenery encroaching on the tracks. This abundance of wild flora and fauna makes the place feel as though it’s miles from the hustle and bustle of urban Paris.

Your unusual walk will take place in amazing silence and privacy, as the railway was built underground, above the city streets, or in deep cuttings. You’ll pass alleys, bridges, roads, factories, buildings, parks and warehouses in an atmosphere of absolute serenity.

Exploring the varied sides of the Petite Ceinture

In the 15th arrondissement the tracks are still present and your walk will alternate between untamed nature and urban landscapes with abandoned stations and bridges high above the Parisian streets.

If you enjoy this walk and decide to explore this little known aspect of Paris in more detail, you may like to try the following…

Enjoy your stay at the Hotel Eden and discover a new and refreshingly unusual side of Paris!