Roland Garros, tennis in the spotlight at the Porte d'Auteuil 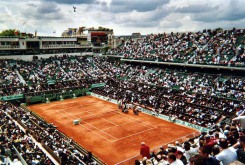 Every year, during the last week of May and the first week of June, Paris becomes the centre of the sporting world as it plays host to one of the four Grand Slam tennis tournaments, the Roland Garros. A key event for the best players in the world.

The highlight of the clay court season, the French Open tennis championship at the Stade Roland Garros is a colossal sporting occasion that resonates around the world, with more than 450,000 spectators and matches broadcast on the national TV channels France 2 and France 3 as well as many international channels. Considered the second most prestigious tennis tournament after Wimbledon, Roland Garros has an exceptional infrastructure: 24 tennis courts on a current area of 8.6 hectares, with ongoing projects to enlarge the premises. The tournament is extremely physically demanding due to the clay surface slowing the ball, enabling long and exhausting rallies.

Roland Garros 2016, an event with a multitude of challenges

Who will succeed Stan Wawrinka and Serena Williams? Can anyone beat them? The 2016 French Open will be especially interesting in more ways than one. In the men’s game, the French Open is the only major tournament that world No. 1 Novak Djokovic has never won. In recent years the Serbian player has ruled the world of tennis, leaving only crumbs for his opponents, but he’s lost the final of the Roland Garros three times; in 2012 and 2014 to Rafael Nadal and in 2015 against Stanislas Wawrinka. In the women’s game the tournament should be highly competitive as the power of Serena Williams is reduced on the slower clay surface.

If you wish to attend the legendary Roland Garros tournament, a stay at the Hotel Eden is highly recommended, so you can enjoy a touch of nature in the heart of the capital.